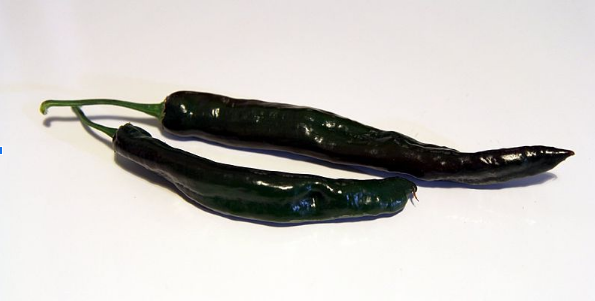 What are pasilla peppers?

Pasilla chile is a dried version of the chilaca pepper. They’re named because of their dark colour (translating literally as ‘little raisin’) and are sometimes known as chile negro, or ‘black chillies’. They’re easily distinguishable due to their dark colour and wrinkled appearance!

When chilaca peppers grow, they start out green and become very dark brown when ripe. When they’re dried out to form pasilla chiles, they take on an extremely dark, almost black appearance.

How hot are pasilla peppers?

Pasilla chiles are considered mild at 250 to 2500 on the scoville heat scale. To put this into context, jalapeño peppers range between 2500 to 8000 SHU. This means the hottest pasilla chile is similar to the mildest jalapeño.

Because of this, pasilla peppers are prized more for their flavour than the heat they bring to a dish. They are often combined with other chillies in Mexican recipes – most commonly poblano and mulato chillies – to create a delicious combination of heat and flavour.

Pasillas have a smoky, earthy and fruity flavour that pairs very well with fruit, honey and red meat – although it can be used in lots of ways! It’s probably most similar to ancho chillies, only less sweet.

You might notice that pasilla chile has raisin or berry-like flavours combined with a smoky richness. Because they’re not particularly hot, their flavour is more noticeable than in some hotter chillies.

The dried version of poblano peppers are ancho chile. These are similarly dark in colour, but have a different shape which is more like a heart, being broader than your average pasilla pepper.

Poblano peppers are hotter than pasilla, but they pair extremely well together. Add some mulato chillies and you have all the ingredients for a mouth-watering mole sauce.

If you want to use pasilla chile in your cooking at home, the best way is to buy them from a Mexican grocery shop, as they can be hard to come by in large UK supermarkets. If you don’t have a Mexican grocers near you, you can buy pasilla chillies online.

They’re most often sold whole, but you can also buy pasilla chilli paste that can be added to meals ready prepped.

While buying pasilla peppers is by far the easiest (and fastest!) way to get hold of them, it’s also possible to grow chilaca peppers from seed and dry them out to form pasilla chiles.

You’ll have to get hold of some chilaca seeds. It’s unlikely (although not impossible) that you’ll be able to get seeds to grow that come from a pasilla chile bought for cooking, so it’s best to ensure you buy seeds intended for growing.

If you’re growing them in the UK, for the best results, it’s best to plant them in pots indoors to keep them warm. However, it is possible to grow them outdoors providing that the seeds are sown during the late spring so the chillies get a lot of sunlight during the summer months.

Whether you’re growing indoors or out, always start the seeds inside and give them up to 3 weeks to germinate and 2 more weeks to grow strong roots. It’s usually best to germinate more seeds than you need and select the strongest seedlings.

Once the plants are strong enough (usually when they’ve grown to about 6 inches tall), replant each seedling into its own pot, or outdoors in a spot that gets a lot of sunlight.

You should have chillies after around 3 months, providing that the plants are growing in good conditions such as being well watered and kept warm.

In order to go from chilaca to pasilla chile, chilaca have to be dried. This helps to concentrate and develop their rich flavours. The best way to do this at home is in the oven. It can take a long time, so most people prefer to buy pasilla peppers rather than growing chilaca at home and drying them out.

Make sure the peppers are of high quality without any cuts or decaying spots. Turn your oven on to its lowest setting and allow it to warm. Spread the peppers out whole (with all greenery cut away) onto baking parchment on a baking tray and allow to dry in the oven for at least a few hours. Be sure to check on the peppers and remove them once they’ve dried out.

Many Mexican or Latin American dishes call for pasilla chile. While we’d recommend trying to get hold of some if you can (because they taste delicious!), there are alternatives you can try such as ancho chillies and poblano.

Ancho have a similar fruity flavour to pasilla and are relatively easy to source. They are of a similar heat level, although can be slightly hotter.

Mulato peppers are another good substitute. They are hotter, but have an earthy flavour like pasillas, only a little more smoky and with an extra chocolate undertone.

Pasilla chile can be used in a huge range of recipes and particularly comes up in Mexican and Latin American cuisine. Because it’s not too hot, it’s a great chilli to use for adding flavour and a little heat to meals that are going to be shared with kids – as kids often are more sensitive to spice!

For those that like heat, pasilla chile is often combined with other fruity, smoky chillies such as ancho and chipotle and used to make sauces. A great way to sample the flavour of pasilla chile is to make them into a salsa and use it to top your favourite Mexican dishes.

Mole sauce comes in many different shapes and sizes, but for black mole sauce (called mole negro) most consider pasilla chile one of the essentials. Pasilla chile is combined with other chillies, commonly mulato and guajillo – although there are a lot of variations! The chillies’ fruity and smoky flavour complements the other ingredients of fruit, nuts and chocolate to make a mouth-watering sauce.

Mole sauce is often served with chicken and leftover sauce makes for delicious enchiladas or tamales.

Linkedin
Prev post
Huitlacoche: What is it & how is it used?
Next post
A Brief History Of Xoloitzcuintli Breed